Art and Culture of Narsinghpur

Narsinghpur in Madhya Pradesh is known for for its cultural distinctness that keeps it apart in the entire state. The region is famous for its great diversity and religious harmony. Of more interest is its identity of being a holy place where ancient temples are located. Its name is derived from the famous Narsingh Mandir. The district headquarters maintains wonderful living culture henceforth its inhabitants participate in various social and cultural programs. They inhabit with complete feeling of brotherhood and unity that make this region important. 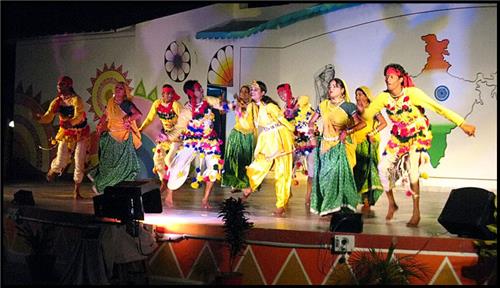 With its uniqueness as of a cultural festival Bundeli Utsav or Bundeli Festival mainly promotes Bundeli or Bundelkhandi folk arts in the region. This festival is common in different parts of the Madhya Pradesh state but remains popular in Basari village of Chhatarpur and several parts of the Narsinghpur district. The purpose of this Utsav is to promote Bundeli culture through folk arts, dances and folk songs programs. This festival welcomes participants from eight districts of the state that include Chhatarpur, Datia, Damoh, Katni, Narsinghpur, Panna, Sagar, Shivpuri and Tikamgarh besides five districts Banda, Hamirpur, Jalaun, Jhansi and Lalitpur from of adjoining Uttar Pradesh state.

Organized on the occasion of Diwali/Deepawali Diwari Dance is popular folk dance form in this region. Participating dancers wear multi-coloured apparels on this occasion while main dancer holds the peacock feathers in his hands. Other dancers stick feathers in their half pants and dance on this occasion. They use instruments such as Dholak and Nagaria. Male dancers project the energy of emotions through beating drums with long sticks. It is aimed at thanksgiving post harvesting season in the region.

Themed like a dance drama, Ravala Dance originated in Bundelkhand and is famous in this region as well. It is usually performed by the labor communities during marriage ceremonies. Its attractions are funny expressions and so do humorous dialogues entertain audiences.

This ceremonial dance is very popular in Narsinghpur like other areas of Madhya Pradesh. Such dances are commonly organized on the occasion of childbirth or marriages ceremonies. They are equally popular during various other social get together or festivals to enjoy happy moments.

The folk dance form namely Raai Dance is popular in this region since several centuries. This dance was famous as classical dance form in the region earlier but today it is one of the folk dances in the area.

The ceremonial dance namely Horse Dance is performed through a trained horse accompanied by heavy and loud drum beats that is named Rabbi. It looks unique when the horse follows drum beats with its four steps while horse rider keeps continuing different types of gymnastic gestures.

Like other parts of Madhya Pradesh state its Narsinghpur is equally popular for various folk songs. Famous Faag songs are known for their rhythmic music during the spring season. Likewise, Alha recitations are other entertaining music for farmers during monsoon here. The folk music of Dadre and Gari are projections of happiness and joy. They are common during the auspicious occasions of marriages. Folk music Lamtera is dedicated to the Gods which Bundeli pilgrims sing. Similarly, Khyal or the Khyal Gayaki folk song is popular in the region and are themed at mythical stories of heroic deeds. Dhapli and Kaharwa folk songs harmonize relationships.

As Narsinghpur is a mixed society where people of all faiths live together the festivals pertaining to all religions are celebrated with ample fun and frolic. Hindus, Muslims and the believers of rest religions celebrate their festivals together to portray unity in diversity. Festivals like Makar Sankranti; Vasant Panchami; Maha Shivaratri; Holi; Vasant Navratri; Rama Navami; Guru Purnima; Raksha Bandhan; Vijayadashami; Deepavali; Bhai dooj; Chhath; Eid; Muharram; Eid-ul-Azha and Christmas amongst others are common festivals celebrated in Narsinghpur with too much fun. They showcase communal harmony.

Painting and Handicrafts in Narsinghpur

Narsinghpur is not famous for any painting although local painters project painting art. Such arts are of local nature hence attains least popularity. This region is famous for its other types of art forms like wonderful handicrafts that project the true ascent of this region. The handicrafts items project cultural diversity of this region. Many such items are worth buying during a trip to this place as collections or gifts for lifetime memory.

Comments / Discussion Board - Art and Culture of Narsinghpur