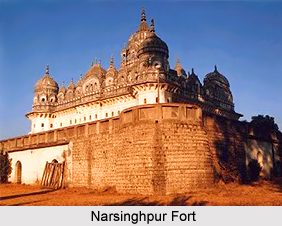 The name Narsinghpur has been derived from the famous temple in the area having been constructed in 18th century by a Jat Sardar ruler. This temple was dedicated to Lord Narsingh so the name of the city was given Narsinghpur. Many other temples were also constructed by the Khirwar clan of Jats who were worshiper of Narsingh avatar. In due time the city emerged as a pilgrimage destination with devotees flocking from far and wide.

It is interesting to note that the history of Narsinghpur is fascinating due to several stories and myths linked with this place. Numerous sites of interests including those under the supervision of Archeological Survey of India (ASI) describe its ancient history. Some monuments in this region belong to even 2nd century. The history though becomes more appealing due to presence of many sacred sites in this region.

The period from 2nd to 4th centuries AD saw the dominance of Satvahan rulers in Narsinghpur. This period witnessed the emergence of a distinct civilization in this region before Gupts dominated it under the kingship of Samudra Gupt while his rule was under fast expansion. The leaflets of history also talks about the Padi rule over the area. Though any solid information about the region is between 4th to 9th century AD when it saw the establishment of Kalchuri kingdom.

Narsinghpur saw the peace and stability under Raj Gond Vansh rule that became one of the prominent local kingdoms in this region. Ruled over by Yadav Rao, the strong kingdom was developed under him and was therefore named Garha–Katanga Kingdom. Gond Dynasty ruler Sangram Shah (1500–1541) established 52 Garh in this region. Other ruler Sangram Shah built the Fort of Chauragarh (Chougan) at Narsinghpur. Its ruins can be still seen today. Sangram Shah; Dalpati Shah Queen Durgawati ruled this area over the decades.

Once Madhavji Bhonsle bought Mandla and Narmada Ghati area by paying 27 lakhs in 1785 the entire area including Narsinghur came under Raghuji Bhonsle reign ruled by Nawab of Bhopal and Pindari’s. Unfortunately this period proved highly devastating to bring instability in the area. The masses were most exploited during this period defeat of Bhosles in the Battle of Sitabuldi in 1817 to British rulers rather proved a boon in disguise because it proved a sigh of relief for them.

Soon after defeating the local rulers at the Battle of Sitabuldi, Narsinghpur and its nearby areas came under the control of British in 1817. Ruled under an alliance until 1826 and overpowering the whole area named Gadarwara pargana alongside Chichli and Gangai it became integral part of colonial rules as various jagirs including Gond under Marathas, Sindhiya ruled Barha, Paloha Jagirs and Pindari Sardars to Chitu and Karim Khan became part of British. The British rulers therefore captured the Fort of Chauragarh in 1818. Many improvements were held in this area the sooner British took over it. British ruler partitioned huge area in 1836 and therefore the area in and around Narsinghpur became part of Hoshangabad. By 1843, this division was nullified after the Bundela revolt.

Once India attained freedom from the colonial British rule, the state of Madhya Pradesh was reorganized like many other states of independent India. Narsinghpur district was reorganized on this occasion. The area is in constant development process since last couple of decades.

While India was struggling for freedom and the freedom fighters from all parts were gearing up for a tireless battle many brave fighters from Narsinghpur joined hands with them. Prominent names included the freedom fighters Gayadutt, Manik Chand Kochar, Choudhary Shankar Lal, Raghunath Singh Kiledar, Mahendra singh Kiledar, Thakur Niranjan Singh and Sri Shyam Sunder Narayan Musharan amongst others who remained active participants in the independence movement.

Comments / Discussion Board - History of Narsinghpur